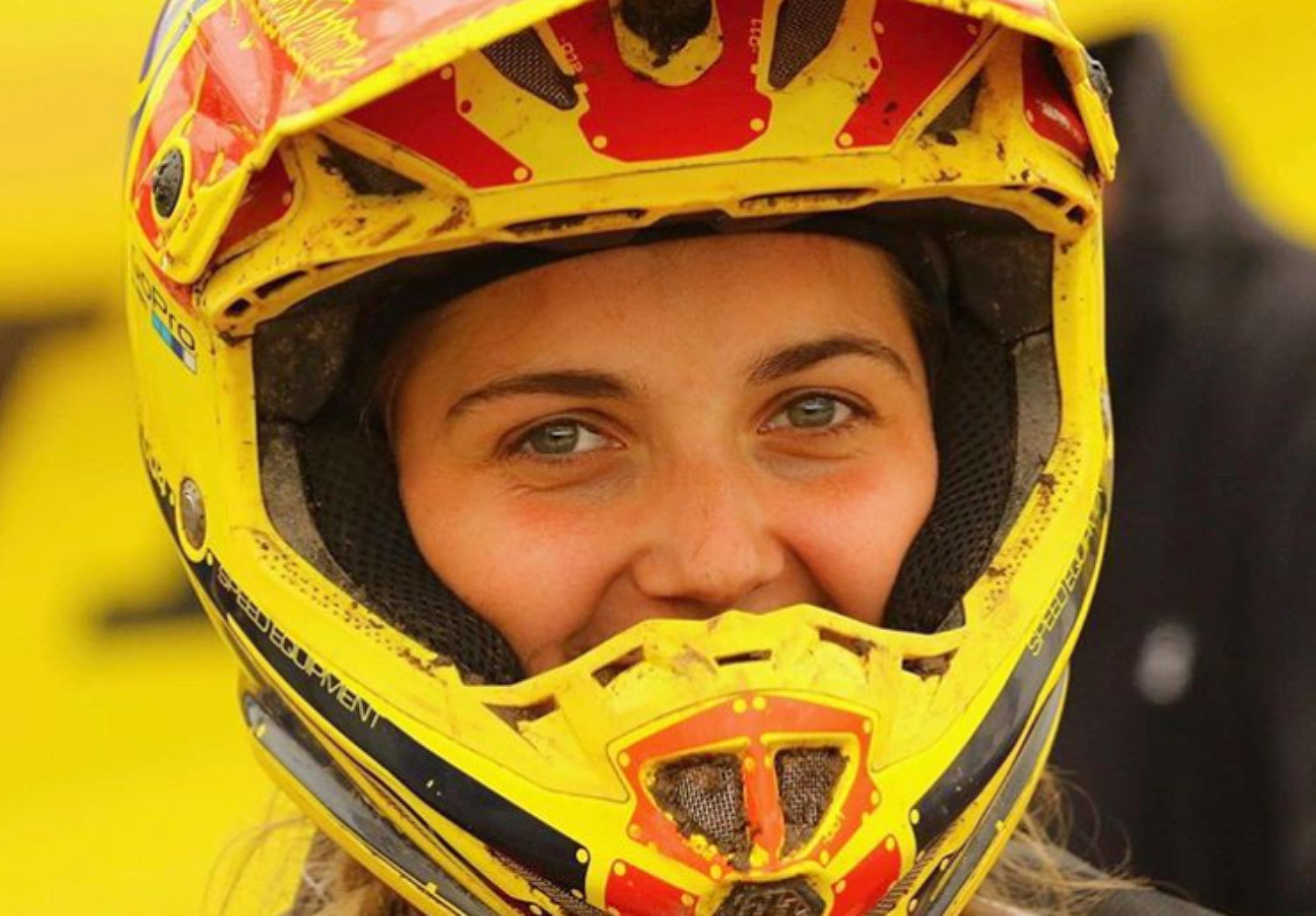 In March 2018, motocross champion Beth Farmer was just a week from the start of the British Championships when she crashed out of a race meet in West Sussex.

Even before her body hit the ground, she knew the fallout was likely to be significant.

“My foot went into another rider’s wheel and it ripped my knee sideways,” she recalls.

“When we came to a stop I was still stuck in the bike and my own bike was on top of me, which put even more downward pressure on my leg.

“I just sat there on the floor because I couldn’t stand on my leg. I knew immediately that I had properly damaged my knee. I could hardly even bring myself to go to hospital. I had so much planned for the new season that I didn’t want to admit what I’d done.”

WHEN RACING IS IN THE BLOOD

Beth, who grew up in Hampshire, has been riding all her life. She was given her first bike at the age of three, started racing when she was six and has gone on to become one of the most successful female riders in the sport.

Now 23, she is a twice-UK Girls National Champion, a top five European rider and was the reigning British Champion at the time of her 2018 accident.

“My mum has always told me there’s more to life than racing, but racing really is my life,” she laughs.

“I have a full-time job in childcare but the rest of my time is spent doing motocross – I literally work, eat, train, sleep until the weekend, then get in the van and drive to wherever I’m competing.”

Held on off-road tracks punctuated by ramps and jumps, motocross is a sport that requires high levels of fitness, coordination and courage. But it also carries the potential for serious injury if a rider comes off their bike at speed.

Over the years Beth has broken and dislocated her shoulders, while a “catastrophic” racing accident in 2014 left her with a broken back.

As she explains on her website: “I had shattered one vertebrae and wedged another one into my spinal cord. I now have two metal rods, 10 screws and two cross plates holding my vertebrae together…” Yet she made a full recovery and returned to racing the following year.

Now, sitting on the track in the aftermath of her 2018 crash, Beth was convinced she had ruptured her ACL – the tough ligament that sits in the middle of the knee, providing stability to the joint.

“It’s a funny thing with racing – most riders know what they’ve done before a doctor tells them,” she says. Her hunch was confirmed when the results of the MRI scan came through. “It was a full rupture. I was told the scan image looked like a fuzzy mop!”

Perhaps surprisingly, reconstruction surgery isn’t the only option for a total ACL tear.

“You don’t have to have the operation,” Beth explains. “The ligament will never fix itself, but you can restore some stability to the knee by strengthening the muscles around the joint.

“But for me, I wanted to go for it. I just wanted to get the knee back to normal and go back to riding.”

Unbelievably, Beth was back on her bike two weeks after the accident – still with the full ACL tear (though she hadn’t yet had the scan result confirming it) – to compete in the World Championships in Italy.

“I’d already committed money to the trip, so I decided to go anyway and try to qualify. I cycled every day to try to build up some strength around the knee and stabilise it a bit. Then I strapped it up, drove to Italy… and crashed and knocked myself out. I just couldn’t ride properly.”

Back in the UK, Beth met Mr Bailey and decided to book in for surgery. “Mr Bailey was really good about the whole thing. I just felt that he was supportive of what I wanted to do and how quickly I needed to get there.”

ACL reconstruction works by replacing the torn ligament with a graft from elsewhere in the body, usually the hamstring.

“They take about 40cm of tendon, fold it into four and attach it to either side of the knee. I had my operation early in the morning so I was able to go home the same day.”

ACL patients can start gentle exercise on their knee almost immediately after surgery, with the focus on bending and straightening the leg. All the same, the early stages of recovery can be painful.

“I found that straightening my knee was really painful – partly because of the muscle that had been removed from my hamstring. I’m no wimp: I walked off the track when I broke my back! But straightening that leg really hurt.

“You’re given ibuprofen and paracetamol to go home with – though I don’t like taking painkillers so I only took them for about four days.”

Back home, Beth was determined to get back to full fitness as quickly as possible. “For the first couple of days you’re supposed to keep standing to a minimum because of the swelling. You have to try to keep your leg raised, and keep icing the knee three or four times a day.

“You also start the physiotherapy as soon as you get home. They give you a leaflet with exercises to do, like putting your foot on something that has been raised off the floor, then letting the knee drop down with gravity. You’re supposed to do strengthening exercises every hour.”

Being a tenacious sportswoman turns out to be useful when it comes to recovering from ACL surgery. “I had my op on a Thursday and I was back in the gym on an exercise bike with the Physiotherapist six days later,” she smiles.

“The only thing I can say is that although the strengthening hurt, I’m now way ahead of where I should be. If you can grit your teeth for those first two weeks, it pays off in the long run.”

Less than a year on from the crash, Beth’s knee is now close to full strength and she’s beginning to plot her return to racing – if not for 2019 then in 2020.

“I’m training all the time and keeping myself in the sport, so I’ll have a good starting level of fitness when I’m ready to get back on.”

ACL Reconstruction may not be for everyone, but for Beth it’s been an excellent decision.

“One hundred percent – it’s worth it,” she nods. “Before I had the operation I’d take the dog for a walk round the block and my leg might give way 10 times. I don’t have that anymore.

“You do have to grin and bear it for the first two weeks. But you’ll get to the point where it will just click and you’ll think, ‘Yes – I’m so glad I had this done!’ I can run now. I can cycle. I can train. I couldn’t do that before the operation. It’s been totally worth it.”

Good luck to Beth for her continuing recovery. If you’re interested in finding out more about her progress, you can catch up with her progress on her website and Instagram channel.