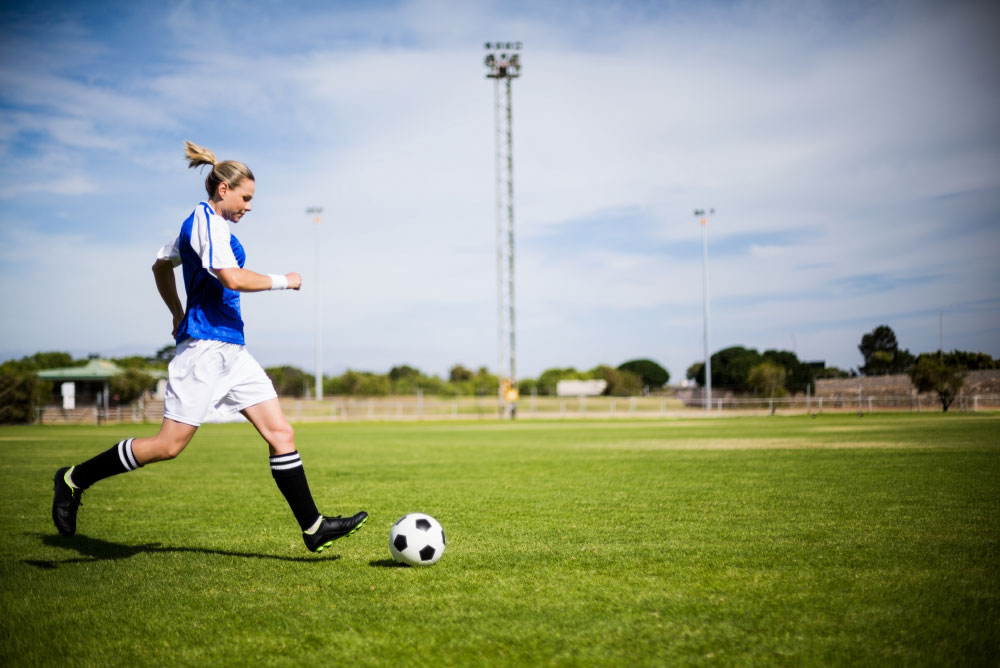 What does it feel like to go through reconstruction surgery for an ACL tear – and the long road back to full health? One of our recent patients tells her story...

Six nil up and already chasing a hattrick, it’s fair to say that amateur footballer Bethany Norman was having a good game when her Hampshire side took on a team from neighbouring Berkshire in the cup. Midway through the second half, however, things took a turn for the worse.

“I’d just run past a player, and then I sort of planted both my feet to hold up the ball,” recalls the 20-year-old striker, who leads the line for the Winchester City Flyers, and has also played up front for the Brighton & Hove Albion development squad.

“I think my studs must have got caught in the turf because my feet stayed in the same place – but my right leg went the other way.”

A jolt of pain and an audible ‘crack’ told her immediately that something unpleasant had happened to her knee joint. “There was a loud crunch,” she winces. “It was a horrible noise.

“I don’t often go down, so I think everyone knew immediately I was seriously injured. I sat on the bench with my leg up and some ice around my knee for the rest of the game. But when I headed to the changing rooms at the end, I could only hobble.”

Despite the severity of the impact, Bethany decided to play the injury by ear and see how it developed over the next days and weeks. Outside football she works as a sports coach, so she was reluctant to be off her feet for too long.

Two months later, however, she happened to go ice skating with her partner – at which point the injury returned in dramatic fashion.

“I was heading off with my skates and my front foot slipped. My back leg crunched inwards and made the same popping noise again. Same leg, same feeling, same noise, same everything. When I got back home my dad took me straight to A&E. And it was pretty clear that I needed an MRI scan to see what was going on.”

In Winchester, Bethany’s club were able to book her an appointment with Chris Bailey Orthopaedics.

“Until that point I’d thought it might be a problem with my Medial Collateral Ligament (MCL), or the meniscus,” she recalls. “But when Mr Bailey did the test for an Anterior Cruciate Ligament injury, which involves gently pulling the leg to see how much ‘give’ there is in the knee joint, we could both see there was quite a lot of give, and he was fairly sure it was my ACL.

“I think he was actually quite shocked that I’d been walking around on it, to be honest – though I told him I’d been doing a lot more than that! Although I’d stopped all my football training, my job still involves lots of walking and even a bit of jogging.”

The scan confirmed Mr Bailey’s suspicions; Bethany had completely torn her ACL, the ligament that runs across the front of the joint and provides stability to the knee. An ACL tear is a common sporting injury, often provoked by the sort of sudden twist or planting action that can happen in a contact sport like football.

In Bethany’s case, the damage left her with a clear choice. She could leave the joint to heal in its own time (but with an outcome that would likely be less than perfect). Or she could consider a reconstruction operation to properly repair the torn ligament, using a graft from her hamstring (which has similar strength and elasticity to ACL tissue) to act as a new, replacement ligament.

“It was a complete rupture, so Mr Bailey said if I wanted to return to playing football he’d definitely advise me to have the surgery,” she adds. “I felt straight away that I’d go for it. I just knew I wouldn’t be able to football with the knee as it was. So although it would mean being out of day-to-day action for a while, I was keen to go ahead.”

With a gap in the surgical schedule the following week, Bethany was able to go into theatre with just a few days’ notice. The operation took about two hours to complete, and went very smoothly. Afterwards Mr Bailey showed Bethany some images of her ACL before and after the treatment. She stayed overnight at the Nuffield Wessex hospital in Chandler’s Ford and then went home to recuperate.

“For the first few days it’s quite difficult to move,” she explains. “It wasn’t so much painful as very weak around the knee. To begin with you have to keep your leg straight, without bending, and lie completely flat when you sleep. You have to throw a dressing gown cord round your foot and raise it with your hands when you want to lift the leg. After that I was on to crutches for about two weeks.”

From that point on, she explains, it’s all about gradually reintroducing movement to the joint and the surrounding muscles. “You have regular physio, and they give you mobility exercises to start off with. They’re not very intense; it’s just things like lifting your heel up to your bottom, or raising your leg straight up, holding it there and then putting it back down again.

“After that you go on to things like strengthening and cardio exercises, and eventually squats and lunges. Ten weeks after the operation, the physio did a test to see if I could walk without a limp (I could). He also had me do a leg press to see whether my recovering leg could bear 70% of the weight that my other leg could bear. At that point it could only do about 20%! But by the 12-week mark I had made it to 70%.

“Obviously you have to play any recovery by ear, but at the beginning they said I could hope to be doing straight-line running three months after surgery, running on uneven ground by six months and changing direction and turning by nine months. That’s if you keep up with your physio and exercises! But I’ve been able to do that and I’m right on schedule.”

Bethany still has a way to go in her recuperation. But she’s pleased with the way things are working out. Having broken through the toughest part of the recovery curve, she’s feeling stronger every day – and beginning to contemplate a return to the hallowed Winchester turf.

“You need to have the motivation to keep working at it, but I would recommend the operation a hundred percent,” she says. “That first moment back on the football pitch was the whole reason I did it, really. But I look forward to each little bit of progress – this week it was running on a treadmill for the first time, then it will be running outside.

“Then I’ll start going back to training and thinking about actually playing a match again. When I was first injured, I stopped going along to watch the training because it was so hard to see other people doing what I used to do!

“Now that I’ve had the op, though, I’m going along to see everybody again. Because I know my leg will get better. I’m on the path to recovery.”