→ A tear or sprain to the outer ligaments of the knee.

What and where are the collateral ligaments?

How do people injure the MCL or LCL?

Collateral ligament damage is a common sporting injury. The usual cause is a powerful blow to the side of the knee, such as in a football tackle. A sudden change of direction is another potential cause of damage. In either case the knee joint gets pushed to the side, stretching and / or tearing the ligaments. There are three main grades of damage. With a Grade 1 sprain, the ligament sustains mild damage but the joint remains stable. In a Grade 2 sprain, the ligament may tear partially and become loose. A Grade 3 sprain usually means a complete tear of the ligament, with instability in the joint. While the MCL is more commonly injured than the LCL, an LCL injury is more likely to be accompanied by further damage within the knee.

What are the symptoms of a collateral ligament injury?

Pain is the most obvious symptom of a damaged MCL or LCL; it is usually felt on the side that has sustained the impact. It may also be followed by mild to major swelling of the immediate area. Where the ligament is completely torn, the knee joint may become unstable and give way when weight is applied to it.

How are these kinds of injuries diagnosed?

Most collateral ligament injuries can be diagnosed with a physical examination of your knee – by checking gently for looseness, for example. Sometimes an MRI scan will be used to investigate damage to the tissue. X-rays are sometimes used to check for associated damage to bones.

MCL injuries are usually able to heal without surgical intervention. In the early stages RICE (Rest, Ice, Compression, Elevation) can help to reduce pain and swelling, and to aid recovery. You might need to wear a brace or compression bandage to protect the knee from further sideways movement. We may also recommend physical therapy to strengthen the surrounding muscles. If we suspect that the tear will not heal naturally, however, we may advise that you have surgery to repair or reconstruct the damaged ligaments. LCL treatment is similar to MCL treatment, unless there is further associated damage to surrounding tissue and bone. 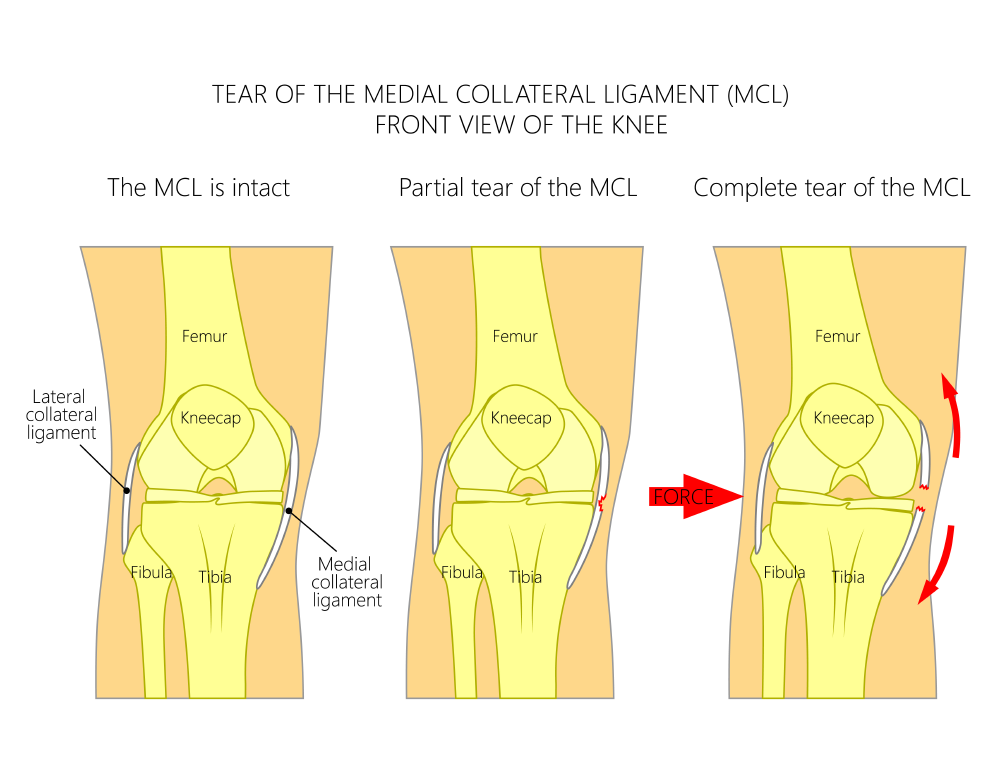